Beware, your smartphone could be a counterfeit!

Smartphones have become an essential part of our lives, both business and private. But a new report from the European Union Intellectual Property Office (EUIPO) shows that fake smartphones cause a global loss of 45.3 billion euros in the smartphone sector in 2015.

The report, written in collaboration with the International Telecommunication Union (ITU), estimates that 184 million fewer smartphones were sold by the legitimate industry in 2015, due to the presence of counterfeit devices in the marketplace. 12.9 % of the legitimate sales of smartphones were lost worldwide due to the presence of counterfeits in the market, equivalent to EUR 45.3 billion.

The report analysed the number of smartphones sold in 90 countries in every region in the world, based on point-of-sale tracking of consumer purchases. In 2015, 1.3 billion smartphones were sold worldwide, meaning that approximately one out of every six people on the planet purchased a smartphone that year, at an average cost of EUR 275.

In the European Union, 150 million devices were sold in 2015, one for every three EU citizens. The effect of counterfeiting in the EU-28 is estimated at 14 million units in 2015, corresponding to 8.3 % of the sector’s sales, or EUR 4.2 billion.

Based on the data available, for other regions, 21.3% of sales were lost due to counterfeiting in Africa, 19.6% in Latin America, 17.4% in the Arab countries, 15.6% in China, 11.8% in the Asia-Pacific region and 7.6% in North America in 2015. China accounts for one third of the total global revenue loss in the smartphone sector.

EUIPO Executive Director António Campinos said: “At the EUIPO, through our reporting and analysis, we are building a picture of how counterfeiting and piracy affect key economic sectors. This is our first report in this series which analyses a sector both inside and outside the EU. Its estimate that 12.9% of legitimate sales of smartphones were lost globally in 2015 can act as a powerful message for policymakers, and all who work to combat counterfeiting worldwide.” 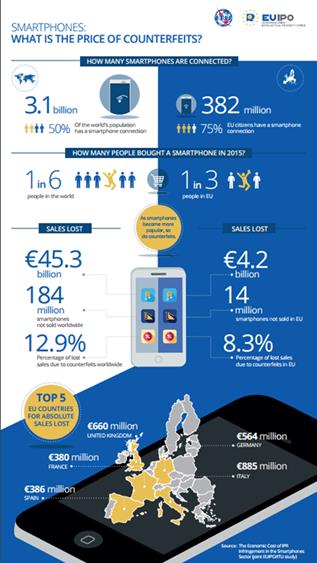 How and when to use the ® symbol with your name or logo?
Placing the ® symbol – for ‘registered trademark’ – against the name of your product signals credibility. It can be the deciding factor that persuades customers to buy your product…
Read more
Article
For WOLF brand, trademark registration was essential
Niels Wouters makes premium streetwear and spirits. He believed in his brand’s potential from the very start. “WOLF is a brand that stands for passion, for fire, for doing things…
Read more
Video