Derivate use of public domain content, EUIPO report of May 2017

Thanks to technological progress and the existence of public institutions such as libraries, access to original works is less problematic than in the past. New technologies create the possibility to benefit from cultural goods through many different channels. Delivery of creative content through those channels often depends on the possibility of creative transformation and re-use of pre-existing content.

Pre-existing content opens up new creative and business opportunities for follow-on creators who are able to add new value to the existing story by transferring it to another medium, enriching it with new creative material, differently accentuating its various plots or adding their own fresh interpretation to it. Copyright still poses, however, some important limitations to the scale and scope of derivative re-use of pre-existing content.

EUIPO, acting through the European Observatory on Infringements of Intellectual Property Rights, has now issued a report that aims to document the usage of public domain content as a basis for new creative projects in the film industry. Europe has a rich cultural heritage, not least in literary works. These works, while enjoyed by readers in their own right, also serve as the basis for many film screenplays, for both European and non-European producers. The EUIPO report examines the role played by works in the public domain and compares films based on such works with those based on works protected by copyright or on original screenplays. 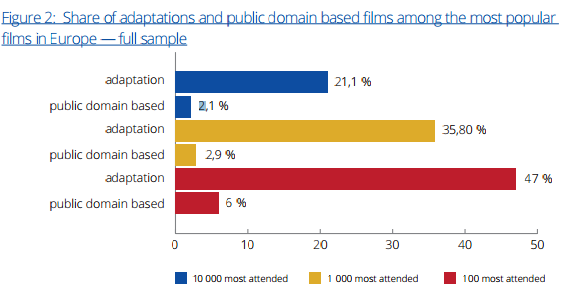 Furthermore a cluster analysis of the project data showed that there are film producers making public domain content a substantial part of their value proposition; established, well-known film studios use public domain content more frequently than the average film producer in the dataset. Film adaptations, in some circumstances, may even be an effective strategy in reducing uncertainties and increasing the economic return on films.

One of the main contributions of the present report is that it provides an empirical description of patterns of usage of public domain content for contemporary creative projects in the film market as well as an analysis of the private benefits accruing to film producers using this type of content for their projects.

The full report can be consulted here.