Het Theezaakje serves social tea with a hint of humour

Tea with the name ‘Decollethee’ – it’s going to make one person laugh while the other just won't be able to see the funny side at all. [Decollethee: (pronounced 'décolle-tay': décolleté is the French word for 'cleavage']. One enraged person typed a furious tweet. The tweet went viral, with the result that Het Theezaakje now has orders flooding in. Alongside Decollethee - the tea mix for ‘women’, with white tea, mistletoe and lady's mantel – Het Theezaakje has invented all sorts of cheerful-sounding names for tea. 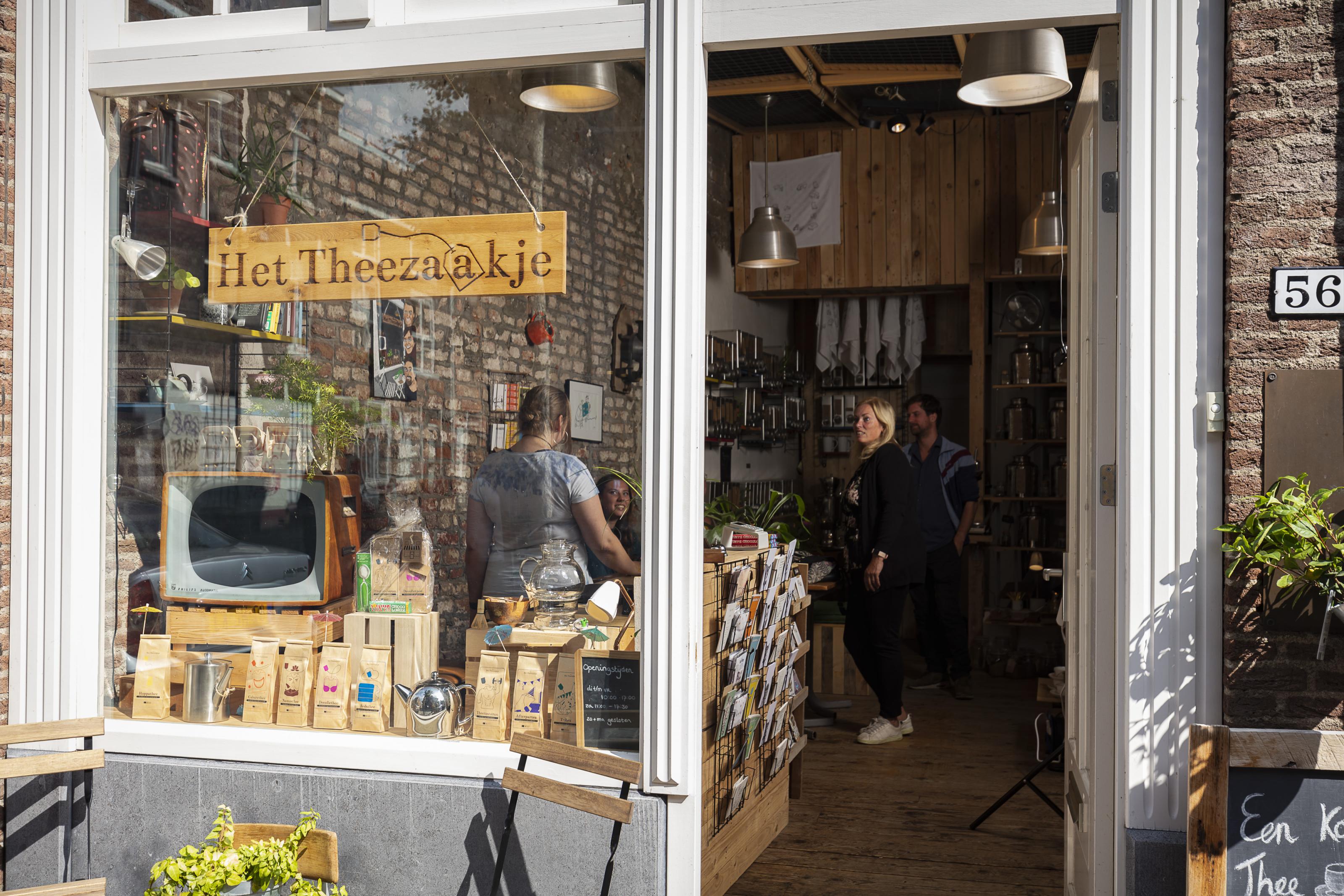 No, they haven’t suffered from all the agitation on social media about their cheerful-sounding names for tea. Naomi Bemelmans of Het Theezaakje grins. It’s quite the opposite, in fact. “Our company’s had a ridiculous amount of brand recognition from it. Orders are flooding in. With a slogan like ours, ‘uplifting tea with a social message’, you have to be able to stand your ground. Being able to laugh at yourself a bit is also good.”

A stepping-stone to the job market

According to its website, Het Theezaakje is an employee cooperative with a social mission. Trainee tea sommelier Naomi explains what that means: “The people working at Het Theezaakje are people who, due to particular circumstances, have difficulties finding normal work. That can be due to a burn-out, depression or other limitation, for instance. ‘Conventional’ employers can sometimes be put off by that. We offer these people a place to work so that they can build social contacts and work experience without the hard and fast demands of regular work. We hope we can be a stepping-stone to the job market for everyone.”

From idea to social tea company

The idea for his socially-minded company came to founder and social entrepreneur Hidde Blom in 2014. Thanks to crowdfunding, the idea grew from home web shop to today’s tea business in Nijmegen. Hidde registered ‘Het Theezaakje’ in 2017. Naomi: “Hidde thought it was a funny name, but he also thought it was a bit obvious. So, he was surprised when he found out he was the only one with that name.”

Trademark registrations followed for ‘Namasthee’ [‘namas-tay’], ‘Decollethee’ ['décolle-tay'] and ‘Afterpartea’ [‘after-party’] in 2020. Naomi explains why Het Theezaakje registered these creative names for teas as separate trademarks: “As a company, we’re very intertwined with playing on words. It’s an important part of our identity. It makes us stand out and people recognise us by them. So, it’s important that they’re not copied.”

Why register a trademark?

Registration of a name or a logo as an official trademark gives you protection for 10 years and can cost as little as € 244. You can then enjoy many benefits compared to your competitors.

Namasthee instead of Sacred Bean

Naomi says Het Theezaakje was very nearly called ‘Het Koffieboontje’ [translation: ‘The Coffee Bean’]. The reason? Hidde had wanted to do something playing on words, but he actually prefers drinking coffee to tea. So, it was ‘Namasthee’ and not ‘Sacred Bean’. Naomi herself is a big tea fan. When she completes her training as a tea sommelier, she will be an expert in brewing as well as in tasting tea. Naomi is happy to give tea tips. “Did you know you must never brew green tea with boiling water? It makes the tea very bitter. Your tea will taste better if you let the water cool off slightly.”

Alongside the tea, at the heart of Het Theezaakje lies creating the right environment so colleagues have work that corresponds to their particular skills. In that respect, they themselves feel that the tea is actually somewhat of a side issue. That being said, they are still showing how you can use your creativity and establish a distinctive brand.

How and when to use the ® symbol with your name or logo?
Placing the ® symbol – for ‘registered trademark’ – against the name of your product signals credibility. It can be the deciding factor that persuades customers to buy your product…
Read more
Article
For WOLF brand, trademark registration was essential
Niels Wouters makes premium streetwear and spirits. He believed in his brand’s potential from the very start. “WOLF is a brand that stands for passion, for fire, for doing things…
Read more
Video