Trends in Trade in Counterfeit and Pirated Goods

Between 2013 and 2016, the share of trade in counterfeit and pirated goods in global trade grew very significantly. Moreover, this growth was reported during a period of a relative slowdown in overall world trade. Consequently, the intensity of counterfeiting and piracy is on the rise, with significant potential risk for intellectual property (IP) in the knowledge-based, open and globalised economy.

The study also performs an assessment of the situation in the European Union. The results show that in 2016, imports of counterfeit and pirated products into the EU amounted to as much as EUR 121 billion (USD 134 billion), which represents up to 6.8% of EU imports, against 5% of EU imports in 2013.

The use of small shipments for trade in fakes also keeps growing. Small shipments, sent mostly by post or express services, are an example of greater trade facilitation; on the other hand, they are also a way for criminals to reduce the chance of detection and minimise the risk of sanctions. The proliferation of small shipments raises the cost of checks and detention for customs and introduces additional significant challenges for enforcement authorities. There is thus a need for coordinated examination of policies in this area. 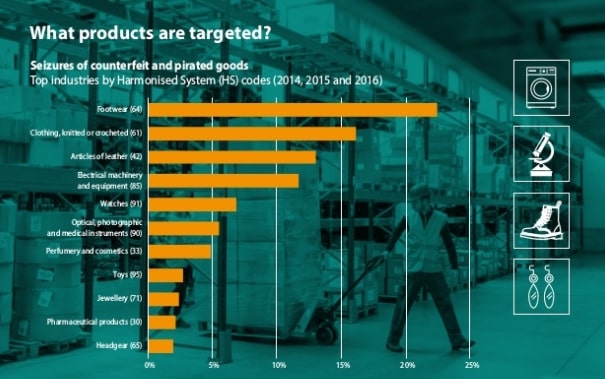 While counterfeit and pirated goods originate from virtually all economies in all continents, China and Hong Kong (China) continue to be by far the biggest origin. 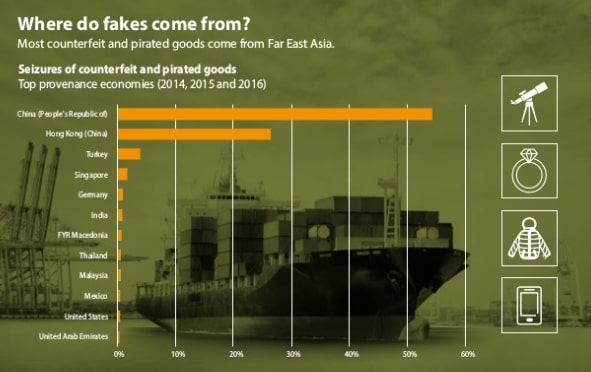 The companies suffering from counterfeiting and piracy continue to be primarily registered in OECD countries; mainly in the United States, France, Italy, Switzerland, Germany, Japan, Korea and the United Kingdom. However, a growing number of companies registered in high-income non-member economies, such as Singapore and Hong Kong (China), are becoming targets. In addition, a rising number of rights holders threatened by counterfeiting are registered in Brazil, China and other emerging economies. Counterfeiting and piracy thus present a risk for all innovative companies that rely on IP to support their business strategies, no matter where they are located. 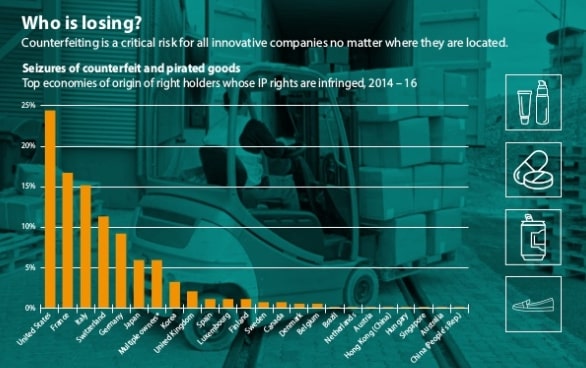 To understand and combat this risk, governments need up-to-date information on the magnitude, scope and trends of counterfeit and pirated trade. This study aims to shed some light on illicit trade, but further analysis is needed to support policy and enforcement solutions, and enable governments and agencies worldwide to work together.