The Benelux Office for Intellectual Property (BOIP) is the official  body for trademarks and designs registration in the Benelux. BOIP can also record the existence of an idea on a given date in an i-DEPOT.

Since 1971, The Netherlands, Belgium and Luxembourg have applied uniform rules for the protection of entrepreneurs' trademarks. As of 1975, as an economic union in the Benelux, they have also implemented the same legislation governing the protection of designs.

In 2006, the separate rules governing trademarks, drawings and designs were replaced by a single convention, the Benelux Convention on Intellectual property (BCIP). Under the umbrella term of intellectual property, the statutory provisions governing trademarks, drawings and designs are laid down clearly and systematically in the convention.  As of 2013, the BCIP also covers the i-DEPOT.

BOIP informs entrepreneurs about the importance of intellectual property. Among other things we do this by providing an accessible digital environment, where entrepreneurs can arrange and manage their registrations quickly and simply.

BOIP is part of the  Benelux Organisation for Intellectual Property, an international organisation made up of three bodies: 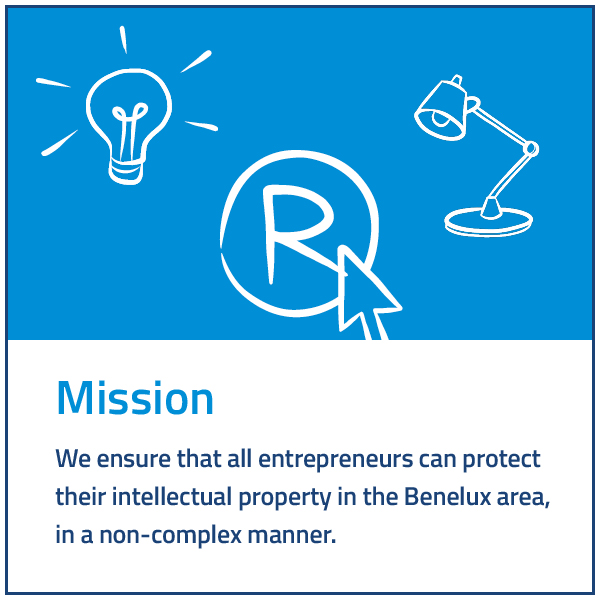 Ever since it was formed, this unique cooperation between Belgium, the Netherlands and Luxembourg, has developed into a contemporary organisation. BOIP is an expert around intellectual property in the Benelux area. We are in close contact with a large number of national and international organisations in the area of intellectual property rights. Efforts to improve our service offering are ongoing.

Our 86 employees are based at offices in The Hague. The fact that BOIP is an independent organisation means we cannot give personal advice. But what we can, and are keen to do, is to make entrepreneurs aware of the ways of the world of intellectual property. We offer direct access to official registration of trademarks, designs and drawings in the Benelux area.

Our employees will be pleased to help:

Contact our Information centre on weekdays for knowledge and information. For personal advice you can contact an external IP professional.

What else does BOIP do?

BOIP registers your trademark or design in one go for the whole Benelux area. This was agreed by Belgium, the Netherlands and Luxembourg in the Benelux Convention for Intellectual Property (BCIP). You can also contact us to record your idea in an i-DEPOT.

Nearly every country in the world has an official body like BOIP, dedicated to registering intellectual property rights. For example, in the Benelux area you can go to the national departments in Belgium (FPS Economy), the Netherlands (Netherlands Patent Office) or Luxembourg (Ministère de l'Économie).

There are also bodies that take care of protecting intellectual property in larger areas, like the European Union (EU):

BOIP maintains close contacts with various IP organisations in the Benelux, Europe and beyond.

Alongside the official IP bodies BOIP also works together with a range of knowledge partners in Belgium, the Netherlands and Luxembourg. These organisations - like the Dutch Chambers of Commerce or the Business advice centres in Belgium - are in close contact with entrepreneurs. This cooperation aims to share knowledge and information around  intellectual property, entrepreneurship and innovation.
More about cooperation

The Benelux Council comprises several stakeholding parties in the Benelux area, like the judiciary, the academic community, lawyers, representatives and the business community.