More information on the various aspects of the opposition procedure is provided below.

Once the opposition has been filed, the parties are given a period of two months in which to decide whether they can resolve their differences amongst each other. This is referred to as the cooling off period. That way, the parties have the opportunity to come to a solution without BOIP's intervention.

The cooling off period begins once BOIP has informed both parties in writing about the admissible opposition. The period can be extended by mutual request.

The opposition proceedings can be suspended before or after commencement.

BOIP can officially suspend the opposition proceedings in the following cases:

BOIP informs the parties of the suspension and the ground therefor. The proceedings will resume if the grounds for suspension are removed. BOIP will inform the parties accordingly and stipulate the steps that they should take. If necessary, an adjustment period will be set accordingly.

BOIP only forwards the submissions filed with the notice of opposition to the defendant when the proceedings begin.

If the defendant asks the opponent for proof of use, the latter has a period of two months to produce that evidence. The opposition will be terminated if he fails to produce any proof. In the event that he does submit evidence, the defendant has two months to comment on it and, if he so wishes, respond to the opponent’s initial submissions, if he has not already done so.

It is preferred that the proof furnished be limited to paper materials such as packaging, labels, pricelists, catalogues, invoices, photographs and newspaper advertisements. These materials may be filed using My BOIP message box. If you do not yet have a My BOIP account, simply use the contact form on our website. You will receive immediate confirmation of receipt. If the cost of forwarding the paper evidence to the defendant exceeds 25 euro, the opponent will be charged for the amount.

Documents submitted to demonstrate use of a trademark may be submitted in their original language (whatever that might be). However, they will only be considered if BOIP judges that, in light of the reason for their submission, these documents are sufficiently comprehensible.

The BOIP will make a decision as promptly as possible after concluding its examination of the opposition.

There are three possible variants as regards the final decision:

An opposition is only found to be partially justified where the opposition filed was too broad and BOIP is of the opinion that while there is a likelihood of confusion between the trademark and the sign, this does not apply to part of the goods and/or services specified in the trademark application.

The party against whom the matter is decided will be ordered to pay costs. Costs are established in accordance with the provisions of the Implementing Regulations (IR), i.e. an amount equivalent to the basic fee for filing an opposition: 1.045 euro. If the opposition is granted in part, no costs will be awarded.

The BOIP decision awarding costs is an enforceable order. The decision may be forcibly executed in accordance with the regulations in effect in the State where it is being enforced.

An appeal may be filed  against a final decision rendered by the Office within a time limit of two months, taking effect from the date of the decision, with a view to obtaining an order cancelling the Office’s decision (Article  1.15bis BCIP). The competent court of appeal is the Benelux Court of Justice. For more information, please go to http://www.courbenelux.be.

Other possible reasons for termination of the opposition

1. inadmissibility
If one of the minimum requirements is not complied with or not addressed, the opposition is inadmissible, subject to a reason for provisional admissibility. Under Rule 1.21 IR which provides for hearing both sides of the argument, a notification of inadmissibility is sent to both parties, together with a copy of the relevant details.

3. closure
The parties may jointly, or the opponent may individually, end the opposition at any time during the proceedings and request closure.

Notwithstanding the instance referred to above, Article 2.16(3) BCIP provides an exhaustive list of grounds for closing opposition proceedings. If any of these grounds apply, the proceedings will end and, if applicable, part of the fees paid will be refunded.

An appeal against a final decision of BOIP may be lodged within a period of two months - counting from the decision - in order to obtain its annulment or revision (Article 1.15bis BCIP). The competent court designated by the BCIP is the Benelux Court of Justice. For more information about the lodging of an appeal, the applicable procedural rules, the court registry fee, contact details, etc., see: http://www.courbeneluxhof.be. 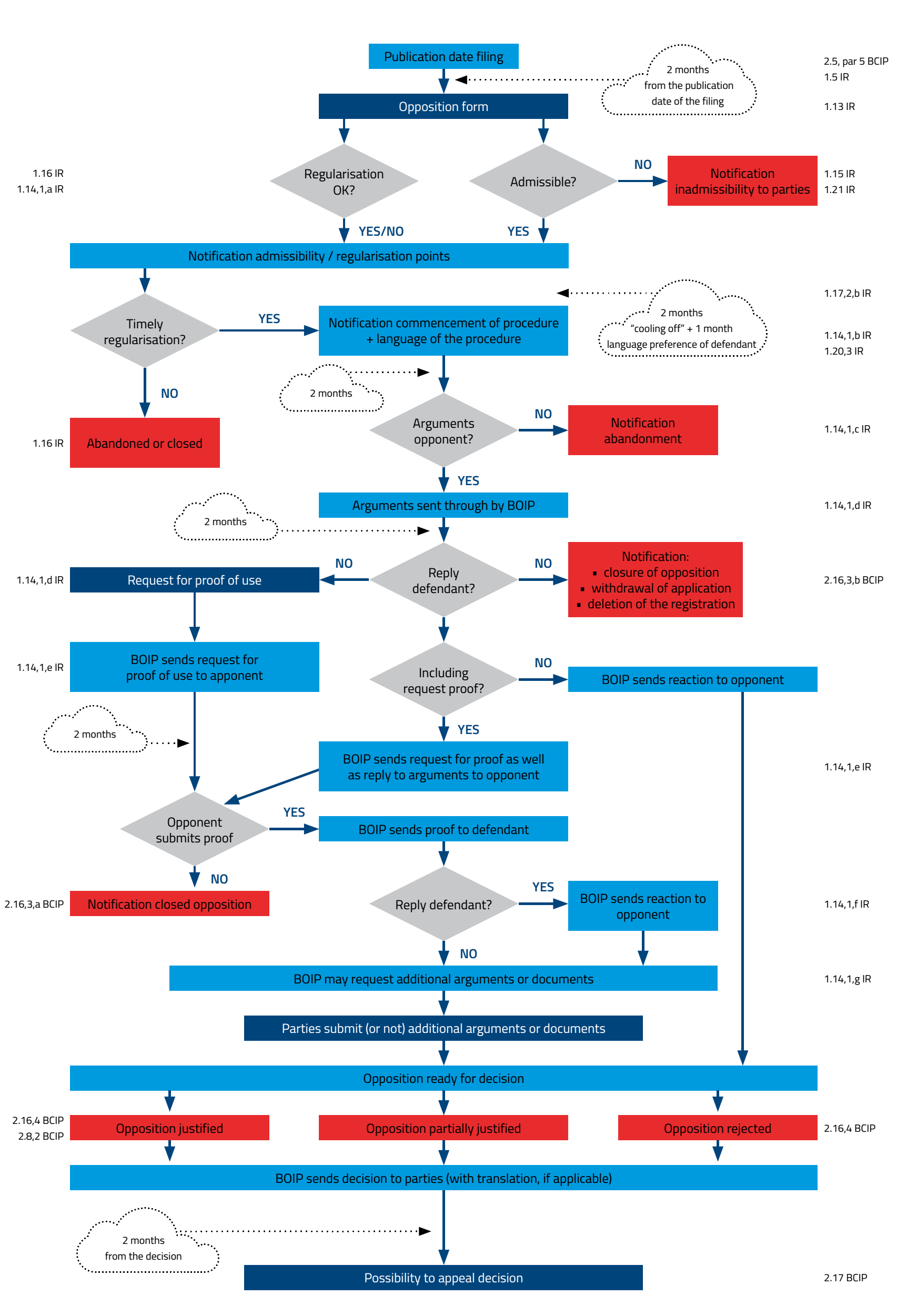